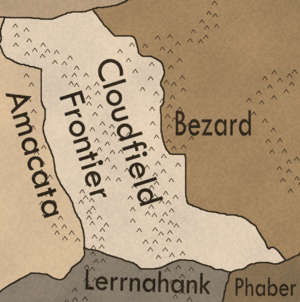 The Cloudfield Frontier was a very mountainous, landlocked administrative division of Amicalis, home to some of the highest mountains in the world. It bordered the Bezard Countship, Phaber Countship, Larrnahank Countship, and Amacata Countship. Krizovist monks formed many monasteries in the mountains of this region due to their secluded nature to meditate and dedicate themselves to the teachings of the Krizovist religion. There were scattered Ekati deposits present in the Cloudfield frontier, but they were usually too dangerous and costly to extract.

With little arable land and a variety of dangerous conditions preventing mining, most of the Cloudfield Frontier's economy was based around livestock farming. The Cloudfield Frontier had a close relationship with the neighboring Amacata Countship, trading water in return for fresh fruit and nuts.

The Cloudfield Frontier was settled by humans sometime during the 1300s AS, sparsely inhabited by goat herding nomads for most of its existence, it was eventually colonized by the Empire of the Red Tower during the 3,670s, chasing after the people of the Adonbaxi civilization who had fled west a few decades earlier. The sheer isolation of all settlements in the region allowed them to go largely unnoticed.

After the revolt had concluded, the monks of the Cloudfield Frontier attended the 10 weeks of negotiation which lead to the drafting of the constitution of Amicalis and the drawing of the borders of its administrative divisions; Maliekt, byn'makha and their fellow humans were all thankful for the help of the Cloudfield Frontier's monks, and they were warmly welcomed in creating their own autonomous administrative division.