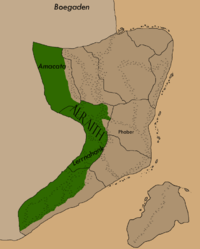 Alraithians were a race of humans from the region of Alraith, which encompassed the flat desert regions of the Amacata Countship, most of the Lerrnahank Countship, and the non-coastal interior of the Southern Peaks Countship, within the Earldom of Amicalis. The Empire of the Red Tower, which conquered and subjugated the areas surrounding Alraith, pillaged many Alraithian villages and took a number of Alraithians captive.

Having little use for their homeland and existing centuries before inventions such as the locomotive would enable the movement of large numbers of passengers across long distances in a relatively short time, the Empire of the Red Tower found large-scale enslavement of the Alraithians to be a waste of resources. The Vulcan Elves instead terrorized the Alraithians by taking over valuable mines, sending war parties to attack any militarily powerful Alraithian tribes, and taking captive Alraithian leaders as trophies

The Alraithians joined the Tarrbuskans, Byn'makha, and Maliekt in overthrowing the Empire of the Red Tower and founding the Earldom of Amicalis. Alraithians were known for their taming of Vesonts and the harsh environments they lived in, but were somewhat enigmatic to the rest of the Amicalic populace until the technological advents of the Khyorganese Renaissance, more specifically the locomotive, made travel between Alraith and the rest of Amicalis much more convenient. Though not as mechanically inclined as the Tarrbuskans, Alraithians were quick to embrace technological progress as it greatly improved feasibility and affordability of interprovincial travel and trade.

Alraithians had dark irises to protect themselves from harsh sunlight, with pale skin and wooly hair that tended towards being platinum blond in color. Alraithians had broad noses with wide nostrils and a low nasal bridge, with short foreheads and prognathic jaws.

Alraithians were relatively average in height among the Human populace of Erudite, though erring on the shorter side, being on average 5'4" (1.65 meters) to 5'7" (1.7 meters) tall, a trait which allowed them to consume less resources while traveling through desolate regions such as the Amacata Desert.