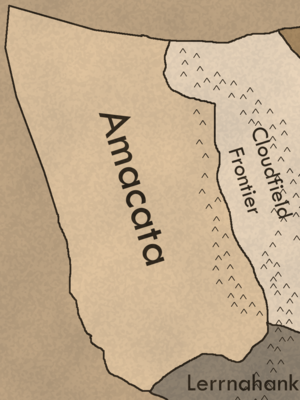 The Amacata Countship was settled by humans roughly 1300 years after the United Plane shattered, where they lived in tribal societies until being colonized by the Empire of the Red Tower, who enslaved the natives during the 3670s, AS. In 3839, AS, the Red Tower Slave Revolt occurred, and the slaves of the Amacata Countship rebelled. After the monks of the Cloudfield Frontier began destroying Red Towerite bases and killing off reinforcements bound for the Amacata Desert, the Empire of the Red Tower abandoned any attempts to reinforce the Amacata Desert's cities, allowing them to be overwhelmed by the slaves.

The Amacata Countship was officialized in 3848 AS at the drafting of the Amicalis constitution after 10 weeks of negotiation.